Have you been by to honor him? 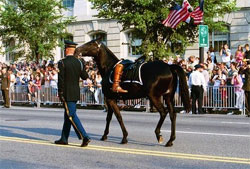 He was assigned a grave with the wicked, and with the rich in his death, though he had done no violence, nor was any deceit in his mouth. (Isaiah 53:9)

For the past several days, tens of thousands of people have passed by a flag-draped casket in Simi Valley, California and Washington, D.C. to pay their last respects to the person whose body lies inside it. Workers at the Reagan Library in Simi Valley say that the number of visitors far surpassed what they had planned for. Millions of us have watched TV's coverage of all the activity; I even corralled my son long enough on Monday to show him the line of mourners passing the casket and to tell him a little about Ronald Reagan, the United States' fortieth President.

America seems to always give its former Presidents honor and respect — whether we did so when they were alive or not. And who's to say that they don't deserve it? Idolize him, vilify him, or anywhere in between, all Americans have thought about Ronald Reagan this week and have reflected upon the legacy he left our country. That's why thousands have waited in line just to walk past his casket. That's also why others have left flowers, cards, and jelly beans at the base of his statue at his library or at his boyhood home in Illinois. That's why our flags fly at half-mast. We recognize that he is worthy of respect and that his death should not go un-marked or un-mourned.

Human beings are not always so astute.

There was no state funeral two thousand years ago. There was no honor guard posted around his body. He didn't lie in state at the Imperial palace in Rome, or at the palace in Caesarea Philippi, or in the courts of the temple in Jerusalem. No crowds visited his boyhood home. There were no statues erected in his honor around which mourners could lay their tributes.

That's because he died as a criminal, and who honors a criminal? He didn't slip away quietly in his bed at home, comforted by the touch of his family and friends. He died hanging on an instrument of torture and execution, bleeding from the scourge, battered and bruised and cut by rods and fists, covered with spit and dirt. A few friends, along with his mother, stood there while he died, but they were far outnumbered by the crowds who mocked and laughed and pointed, by the folks who put down their heads and hurried past, by those who covered their children's eyes and rushed them by. He wasn't honored as a king except by a mockingly ironic sign and a criminal hanging beside him. No one laid gifts at the foot of his cross; in fact, soldiers shot dice for his few possessions.

There was no special tomb built for him; his body was saved from the likely fate of burning on a garbage heap only because a friend placed it in his own tomb. There was no funeral attended by heads of state. No speeches were given in his honor. There was no line to visit that tomb, but only a handful of women come to do the last things for him that they could. But they soon discovered that very often we human beings give honor to those who don't deserve it and fail to give it to those who do.

Though almost no one else noted Jesus' death, God noted it. Noted it, and wouldn't have it ...

After the suffering of his soul, he will see the light of life and be satisfied; by his knowledge my righteous servant will justify many, and he will bear their iniquities. Therefore I will give him a portion among the great, and he will divide the spoils with the strong, because he poured out his life unto death, and was numbered with the transgressors. For he bore the sin of many, and made intercession for the transgressors. (Isaiah 53:11-12)

They came away with a story to tell.
The faithful followers who discovered Jesus' resurrection also discovered that the death overlooked by so many turned out to be the pivotal point of human history — the point where God enfleshed took on his shoulders the iniquities of the human race. They came away with a story to tell and they told it. They told it to all who were within earshot and at whatever the price they must pay to tell it. And two thousand years later, more honor Jesus' death than ever before. He is worshipped around the world, arguably more influential now than he has ever been. Of how many kings and presidents can that be said?

Join the procession. Pass by his Cross. Feel the rough wood. See the dried and encrusted blood shed for you. Bend down to look into the tomb and see for yourself that it stands empty. And don't forget to honor him with a gift; lay down your life there as the only fitting gift for the one who laid down his life for you. That will leave both of your hands free to carry away the gift of life he longs to give to you.

"Join the Procession" by Patrick D. Odum is licensed under a Creative Commons License. Heartlight encourages you to share this material with others in church bulletins, personal emails, and other non-commercial uses. Please see our Usage Guidelines for more information.