How frequently do you and lie? 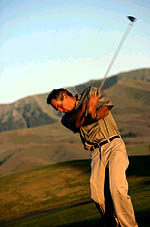 John and Bob were two of the bitterest golf rivals at the club. Neither man trusted the other's arithmetic. One day they were playing a heated match and watching each other like hawks.

After finishing on the fourth green and marking his six on the scorecard, John asked Bob, "What'd you have?" Bob went through the motions of mentally counting up. "Six!" he said and then hastily corrected himself. "No — a five."

John said, "Nope, you claimed six, then changed it to five. But actually you had seven."

"Then why did you mark down eight?" asked Bob.

John told him, "One stroke penalty, for improving your LIE."

God is concerned that we be a people of truth.
Some golfers are notorious for stretching the truth (that's a nice way of saying they lie), but they're certainly not the only ones who do so. In fact, you probably find that lying comes all too easy.

When we're caught doing something we shouldn't be doing, it's easy to lie to try to cover up our involvement.

When we're asked to do something we don't want to do, it's easy to lie about plans we haven't made.

Unfortunately, every lie we tell makes it that much easier the next time. And some people have spent so much time "improving their lies" that they have trouble distinguishing between the real truth and the "truth" they have manufactured.

God is concerned that we be a people of truth. "Therefore, putting away lying, 'Let each one of you speak truth with his neighbor,' for we are members of one another." (Ephesians 4:25)

Diogenes was a philosopher in ancient Greece. He was said to have walked through the streets of Athens, carrying a lighted lantern in broad daylight in a futile search for an honest man.

There are people all around you who are searching for the same thing. May they find in you someone who will tell the truth, no matter what — even on the golf course!

"Honesty Search" by Alan Smith is licensed under a Creative Commons License. Heartlight encourages you to share this material with others in church bulletins, personal emails, and other non-commercial uses. Please see our Usage Guidelines for more information.