What can we learn by just a few obscure references in Scripture about Seth? A whole lot of hope! 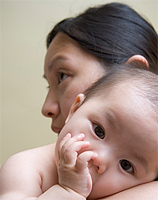 As I have visited with mothers of all ages and stages, so many of them blame any of a child's problems, misbehaviors, rebellion, medical issues, school problems, relationship struggles, and personal "mess ups" on themselves.

Instead of thinking, "Thank you, God, for the opportunity to influence this child!" — whether as a bio mom, adoptive mom, foster mom, church mom, teacher mom, neighborhood mom, auntie mom, grandmother mom — they often spend their time going "If only I had done this, they wouldn't have had this problem or would have done better in life."

There's something in the heart of most women that wants the best for the children God gives them to influence. So, they take it personally, even blame themselves personally, when that child doesn't find all of the goodness in life that they believe God intends for him or her.

So I'd like to share with you an insight that God had waiting for me about a year ago as I was reading through the first book of the Bible, Genesis. It's an interesting twist to an often overlooked story, but an insight that I believe that God intended for us to find!

No mother could have more deservedly blamed herself for her child's problems than Eve. No woman of influence could have more appropriately said, "If only I had done this and not done that, then they would have turned out better!" And no one could have said this with more rightful anguish than Eve!

The unthinkable happens as a result of the sin that Eve and Adam introduced into the world. One of their sons, Cain, kills the other son, Abel! The loss of a child is devastating — beyond words to express. Yet to have one child murder another of your children is a debilitating and unrelenting torture.

And for Eve, in this moment of loss, there is no place to hide. There is no teacher or church or peers or TV or culture upon which she can rightfully blame Cain's evil. Eve is trapped in her grief, loss, and self-blame. She opened Pandora's Box, and the results ripped apart her family and her heart.

Yet the story doesn't end for Eve on this awful note of grief, loss, and failure. God's unmistakable and incredible grace intervenes and changes the trajectory of Eve's influence and rekindles the hope in Eve's heart!

God's actions become God's message to every mother who has done her best to influence her child or the children in her circle of influence. And this message isn't just for moms who worry they have failed their child in some way, but every parent and every person of influence in the life of children.

God gives Eve another son. His name is Seth! Eve may not have felt worthy of the opportunity. She may have worried about what would happen this time with her boys. She may have doubted her ability to handle the situation, but God chose to give her another chance. The language is clear, God intentionally gave Eve another son — the word can be translated "appointed," "granted," or "purposely gave" (Genesis 4:25).

God graced Eve with another boy... another chance... another start... another opportunity... to be a mom, to be a woman of influence, to be the person who makes a godly difference in the life of a child and in the life of a family and in the future of the world. God purposely chose to get Eve out of looking in her rearview mirror and to help her quit saying, "If only I had..." and "If only I hadn't..." and got Eve focused forward on what she could do, with God's help, to bring God's blessing to the world through a child she would name Seth — which means "God has granted"!

There is a wonderful story and deeper story told in the Bible's fine print if we take a few minutes to read it and ask the Holy Spirit to speak God's hope, God's truth, God's grace into our lives! You see, two powerful things result from Eve's son, Seth.

For the first time, people begin to "call on the Lord" (Genesis 4:26). Seth's family begins a group of people who seek after God, who long to restore their walk with God in the cool of the day that was lost with sin! Notice it is Eve's grandson, Enosh and his birth, that begins this new journey. This is directly in contrast to Cain, who "went away from the presence of the Lord" (Genesis 4:16) and we read nothing about God in the story of Cain's descendants in Genesis 4:17-24!

While the lineage of Cain produces scoundrels and violent adulterous people, Seth's lineage brings us to Enoch, one who walked with God (Genesis 5:24). The way the Bible seems to describe it, Enoch was so close to God, that one day at the end of their walking together, God seems to have said, "Hey Enoch, we are closer to my place than yours, why don't you just come home with me for good!"

God put this story in the great story of Scripture for us!
Eve's influence on Seth begins humanity's movement toward God, toward hope, and toward reconciliation and renewal of our connection to heaven's grace.

So what can we, all of us — and especially mothers and mothers to be — learn from all of this? What is it that God really wants to say to us?

First, we can always "what if" and "if only" till we're blue in the face and broken in heart because there will always be a boatload of things any parent wishes she or he would have done or said differently. But bottom line, if God had trouble with his first kids making wrong choices — Adam & Eve — then it stands to reason that we're going to have some children who make wrong choices.

Some of those choice will be influenced negatively because of some of the mistakes we have made. We don't want to sugar coat that. But, we can't own their choices any more than God is to blame for Eve and Adam's choices. But, we can work with our children, our grandchildren, and other children we influence, to redeem their choices, just as God allowed Adam and Eve to do with Seth! We can give them the opportunity to choose new paths and find new hope in fresh starts and help them move toward God!

Second, we can't redeem the future by spending all of our time looking in the rear view mirror at the mistakes we have made. That only causes more wrecks because our focus is in the wrong direction and on the wrong things. With every new generation, we can focus forward. We can work in the lives of each child God has brought into our circle of influence, and point them in the direction of the Father.

While we don't know a lot about Seth, we do know this: when his son was born, his family began to call upon the Lord and it changed everything! Their worship of God, their honor for God, their trust in God, their dependence upon God opened the way for multiple generations of faith — deeply devout and wonderfully blessed!

And God put this story in the great story of Scripture for you and me, for us — and especially for our women of influence so that we can move from the "if only" conversations we have with ourselves and so that we can quit spending so much time looking in the rearview mirror beating ourselves up for what was done or not done in the past.

God wants us to follow the example of Eve, the mother of Seth. The Father wants us to focus forward and build a legacy of faith through the children he gives us to influence today so that generations later, folks can see a person walking with God and say, "This person walks with God because many generations ago, someone chose to be like Eve, the mother of Seth, who God used to change everything!"

"Untold Stories: Eve, the Mother of Seth" by Phil Ware is licensed under a Creative Commons License. Heartlight encourages you to share this material with others in church bulletins, personal emails, and other non-commercial uses. Please see our Usage Guidelines for more information.