What does this have to do with Phil Campbell 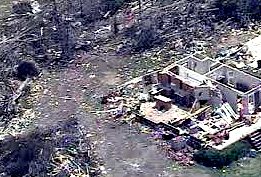 [Jesus said,] "Do to others whatever you would like them to do to you. This is the essence of all that is taught in the law and the prophets" (Matthew 7:12 NLT).

But there are many people with the name Phil Campbell. In 1995 the first convention was held in this small town of 1,150 residents for people bearing the same name as the town. This year's celebration was to be a big birthday bash as Phil Campbell—the town—turned 100. It didn't take long before new plans were made.

Phil Campbells from all over decided to converge on the city to help. They cleaned up debris, donated money, helped start a Habitat for Humanity house, and simply became a part of the community for the weekend. They wanted to show they cared.

With all the Phil Campbells descending on Phil Campbell you might think it would cause some confusion. But the Phils handled their common names with ease. They simply called each other by their hometowns or states.

Quite a scene wouldn't you say? People from divergent locations coming together under a common name to form community in a time of need.

Don't wait until devastation hits!
My hunch is you have had a time or two in your life when you were devastated and could have used some "Phil Campbell encouragement." You would have welcomed people from different life stations who gather under one name to help each other carry life's loads.

Such a place exists. It is called the church. And although imperfect, most churches are at their best when someone is hurting and struggling. No church can waive a magic wand and make all problems disappear. No church has the resources to pay all your bills or the power to bring back a loved one.

But every church can walk with you in the toughest times and laugh with you in the best of times. The name these people gather under isn't Phil or Mary or John or Kim. But it is common to them all. They converge under the name of Christ and somehow become his hands and feet in the world. Your world.

You may not have experienced an EF-5 tornado, but you have experienced trials that have felt like it, haven't you? And if you haven't, you most likely will. Don't wait until devastation hits before finding your Phil Campbell community.

"Finding Help When Devastation Hits" by Rick Brown is licensed under a Creative Commons License. Heartlight encourages you to share this material with others in church bulletins, personal emails, and other non-commercial uses. Please see our Usage Guidelines for more information.