It's a Small World After All

The Story of a sponsor meeting his child through Compassion International. 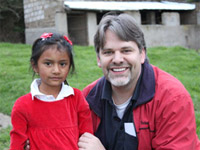 by Ben Steed (01/26/2011) | Compassion International
Fernanda is a 5 year old girl who had been waiting for a sponsor through Compassion International for 9 months. Lee Raney, one of my fellow travelers, had recently sponsored Fernanda and I was fortunate enough to travel along with him and a translator to Fernanda’s house for a home visit.

We left the project center and headed to her home on the Ecuadorian hillside, a half-hour trip for Fernanda — 15 minutes by foot and a 15 minute bus ride. Fernanda had met Lee earlier that day, but she and her mother were understandably shy, particularly about traveling in a car with 3 strange men.

It was a wild ride, complete with potholes, cows, and lots of mud. Along the way we learned that Fernanda’s mother worked on a flower farm, 13 out of 14 days. She receives minimum wage, which is $240/month — a decent paying job in a country where 40% of the people face extreme poverty. Still, she has two children (5 and 1), is a single mother, and also takes care of her mother who lives with them. 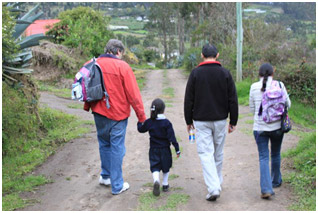 We finally arrived, walking the last 1/2 mile to her home. Lee and the child walked hand in hand and she seemed to relax a bit more with each step we took towards her home. The home was a "duplex" of sorts: two rooms with separate entrances for Fernanda’s family and her aunt’s family who lived in the other room. It was humble — even sobering. It was one room, two beds, one dresser, and no chairs. They had a small dual-burner that served as the kitchen where beans were soaking. It was dark, with only two light bulbs burning. Rent: $25 per month.

Fernanda was excited to show Lee her small collection of stuffed animals. Much like my own 4 year old who is shy, she was now much more comfortable in her own home. Lee shared with her a few gifts (including a pretty red dress), and Omar, our translator, had a gift for expressing the emotions of both Lee and the child in his words. 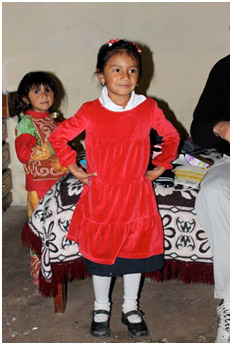 Lastly, Lee pulled out a Spanish Bible. Fernanda lit up. "I can’t read yet, but as soon as I can I’m going to read this!" she exclaimed, putting it in her dresser. We prayed over her and her family, and stepped outside as the light of the day was beginning to fade away.

In that moment, the world seemed simultaneously large and small to me. Here, standing in (what was to me) the middle of nowhere was a child whose life was now changed for the better. She is getting three nutritious meals each week. She is now regularly interacting with kids and adults in the setting of a church. She is learning about the so-called Jesus who is much more tangible when people like Lee and his family are willing to extend compassion to complete strangers because of Him. They live 5,000 miles apart but are now joined in a way that connects them not only to each other but to the entire kingdom of God. It doesn’t happen through wishful thinking. It happens when God’s spirit moves through people and they respond to it by becoming the hands and feet of Jesus.

Just like Fernanda, over 1.2 million children are being released from poverty in Jesus’ name through Compassion International. To learn more about sponsoring a child, please visit Compassion.com.

Here are the entire series of articles from Ben's trip to Ecuador:

It was dark, with only two light bulbs burning. Rent: $25 per month.

"It's a Small World After All" by Ben Steed is licensed under a Creative Commons License. Heartlight encourages you to share this material with others in church bulletins, personal emails, and other non-commercial uses. Please see our Usage Guidelines for more information.