Is it too late to keep them from stealing away your wonder? 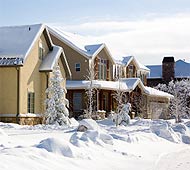 Like manna that fell on the wilderness ground, kids asked "what is it?" about the flakes falling from the sky. Adults stood with outstretched tongues hoping to catch a snowflake drifting downward like a deployed parachute. Motorists swept off blankets of the white stuff that had covered their cars before heading home.

Houston was transformed into a Winter Wonderland. While others fell awestruck, I merely smiled. I had seen lots of snow when living in Denver, Colorado. Yes, there's something about snow that quiets the day and romances the heart.

Until it's over. Then the reality of winter weather blasts us. Icy Interstates. Delayed flights. Slick streets. The familiarity of snow made me miss the wonder of it all on December 10.

Familiarity with Jesus can make us miss the wonder of him anytime. At first, stories about him strike us with simplicity and power, like falling snowflakes. But then we get used to him. The first few lines of a scripture passage are read and we think we know what's coming, like watching reruns of Seinfeld for the 300th time. Familiarity may not breed contempt, but it does deliver dullness.

The result? Wonder. "And all who heard it wondered at what the shepherds told them" (Luke 2:18). Like kids seeing snow for the first time, all who heard this news about a Savior born in a manger stood in awe of what they were told.

Regain your wonder by following the shepherds!
Like snow, it was fresh, clean ... one of a kind. Like snow, it gathers momentum, one piece of wonder falling on another until it blankets Luke's writing.

Maybe that is my problem. Maybe that is our problem. We look for God only in big, flashy productions and forget he is with us right where we are, ready to transform our dead-end jobs and dull lives into something meaningful and memorable.

Regain your wonder by following the shepherds. To the field: away from "wonder-stealers." To the night: when it is quiet and you can hear God. To action: doing whatever it is he tells you. And next time it snows in your area, try to taste a flake on your tongue.

"Winter Wonderland" by Rick Brown is licensed under a Creative Commons License. Heartlight encourages you to share this material with others in church bulletins, personal emails, and other non-commercial uses. Please see our Usage Guidelines for more information.