How Would You Draw Your Face?

Do you have a long face? 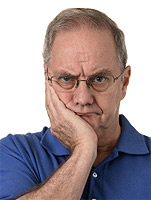 by Bill Sherrill (09/14/2010) | Special Features
Do you remember the old "preacher story" about the boy who turned in a drawing, which appeared to be a mule? It was an assignment to draw something connected with Christianity. The teacher asked if it was the "mule" on which Jesus rode into Jerusalem. The boy replied, "No, it was the picture of the face of a Christian!"

Sadly, the boy's view of the face of a Christian is often not much of a joke. Far too many feel that the long, solemn, unhappy face best represents those who claim to be holy.

Is our Faith really that hard? Isn't the Messiah described as having been anointed with the "oil of joy" (Hebrews 1:9 TNIV)? What is this thing which causes so many to view Christianity as a burden to be borne? Jesus' invitation was punctuated with those beautiful, relieving words, "... for my yoke is easy and my burden is light" (Matthew 11:30). Are we still stuck in some non-biblical tradition which prescribes solemn faces as a mark of holiness?

There are enough solemn, sad and distorted faces in the world without feeling that we need to increase the number. What this sad old world really needs is the true Savior and that we carry him as the message in our daily lives. The Savior we know was a man of joy. He is not only saving the world from sin, but he was sent to bring it joy (Luke 2:10)!

let's get rid of the long faces and bring the world "the oil of gladness"!
There was never a Christian who had more reason to be sad and long-faced than the Apostle Paul. He was beaten, jailed, stoned and shipwrecked, yet his advice to the Philippians was, "Rejoice in the Lord always; again I will say, rejoice!" (Philippians 4:4). The word "rejoice" is found 145 times in the Bible. Do you think that might qualify for a "direct command?"

With Jesus as our example and with the Bible as our command line, let's get rid of the long faces and bring the world "the oil of gladness"!

"How Would You Draw Your Face?" by Bill Sherrill is licensed under a Creative Commons License. Heartlight encourages you to share this material with others in church bulletins, personal emails, and other non-commercial uses. Please see our Usage Guidelines for more information.