Living in the Misunderstood Kingdom

What would you say after the coffee shop bomb? 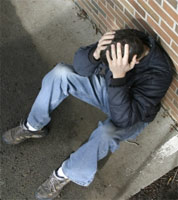 The crowds gathered around him, pressing in to hear every word. And, regardless of the growing numbers, each listener could hear. There was mystery and hope in his words. His name was Jesus. Could he be the "ONE"?

Jesus spoke of a kingdom that was new and different, one that was so near it was here. Could it be that this Jesus was the coming king? Could this curious man from Nazareth be a stealth version of the anticipated warrior king?

But, Jesus presented an upside-down kingdom. One that took the people beyond their long-held expectations. This mystery grabbed their attention and messed with their preconceived notions. He was introducing them to a kingdom without power grabs and political posturing; a mysterious kingdom without hidden agendas, one that was timeless.

Even those closest to Jesus misunderstood him, but it was all part of the plan.

This new kingdom required a demonstration. Jesus knew that people would have to see the difference to understand it. His cousin, John, helped to open the door of understanding, but even John could not grasp it fully.

And now John's future ministry was in question. His heart longed for the "new" kingdom, but he was imprisoned and sentenced to death by the current kingdom. His part of the plan was about to be completed, but a flash of uncertainty invaded his heart. He sent a couple of his friends to talk to Jesus.

"John the Baptist sent us to you to ask, 'Are you the one who was to come, or should we expect someone else?'"

At that very time, Jesus had cured many who had diseases, sicknesses and evil spirits, and gave sight to many who were blind. So he replied to the messengers:

Go back and report to John what you have seen and heard: The blind receive sight, the lame walk, those who have leprosy are cured, the deaf hear, the dead are raised, and the good news is preached to the poor (Luke 7:20-22 NIV).

When John's friends returned, they told him about all they had seen and heard. Then, one reported that Jesus also said, "Blessed is he who does not fall away on account of me." In other words, hang in there, John, I know it seems like you have been left alone and forgotten, but do not despair — keep the faith. The introduction is complete. The Kingdom is here.

Great words! Now John could handle whatever happened; his task was finished. The "new" kingdom was present tense; it was visible and verifiable. This kingdom was not defined by borders or numbers or a lifespan, but boundless love, transformed lives, and faithful hearts.

No one dies in this kingdom. On earth there is death, but there is no death or power of death in Jesus' kingdom. Jesus never did funerals, his every encounter with funerals resulted in someone being resurrected (even at his own).

Faith says HE is the "one," and I am part of the kingdom even if it doesn't feel like it. Therefore, I will not fall away.

In Mark Buchanan's challenging and perceptive book, "Things Unseen," Mark tells about Craig. He had come from alcoholism, petty crime, a wife who drank herself to death, and a tragic fall that left his body in chronic pain. But through it all Craig had come to know Jesus. His attitude was transformed. Life was good.

How would you respond?
Then, came the coffee shop bomb: Craig told Mark, "Don't take this too seriously ... I just don't want to live anymore."

"It's what isn't happening. I've been waiting a long time for something, anything to change--my body to heal so I can work, a woman to come into my life so I'm not always alone, the court case from my accident to be settled so I can get past it. Bad news! Another setback, and then another! I've had enough. I just would rather not have to live anymore. It's like God doesn't notice me. I don't rate His attention. I sometimes wonder if any of this Christianity stuff is even real."

How would you respond?

My answer: "My faith does not rest in what God does or does not do in my life. My faith is in Jesus and the kingdom that extends beyond this world. I will honor him and follow him, regardless of what he does or does not do for me or for others. Because of Jesus, this world is not enough. His Kingdom lives forever. So do I"

Spend some time in prayer. Ask God to help you write an answer to Craig's coffee shop bomb. Let your personal faith story shape your response.

Now, read your response aloud to God and ask HIM to edit it, to transform it, and give it power.

Soon, God will put you in a conversation where these words will need to be said. Pray for God to open your ears and eyes to the opportunities to speak for Jesus and the Kingdom.

"Living in the Misunderstood Kingdom" by Ron Rose is licensed under a Creative Commons License. Heartlight encourages you to share this material with others in church bulletins, personal emails, and other non-commercial uses. Please see our Usage Guidelines for more information.