When can the destination make you miss the real gem of the trip? 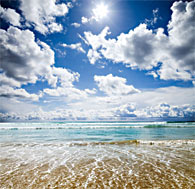 by Sarah Stirman (09/28/2009) | Just for Women
It had been a hot, difficult week of work for the teens on the mission trip. The other sponsors and I were just as eager as the teens for a fun day — an excursion to a water park in a nearby coastal town. The park wasn't large, but was a well-planned water amusement park.

We enjoyed the rides, slides, and boogie boards. There was no need to leave your inner tube to stand in line — you could float while waiting for the various rides. Rapids and a conveyor belt hauled park-goers the circumference of the park as they enjoyed enormous buckets of water dumped at random times and various waterfall spots. It was a good way to relax after a long week of hot mission work for the teens and sponsors.

When we gathered for lunch, almost as an afterthought, several of us made plans to venture out to the beach. With admission to the park came access to the adjacent beach. We cleaned up our area, left the shady picnic spot of the park, making our way toward the beach.

Up a flight of stairs and across a lengthy, narrow, rickety, wooden bridge we trudged through the heat of the glaring sun. The bridge seemed forever long as it stretched across sand overgrown with weeds. Finally the bridge emptied the group onto crystal white sands with the thunderous ocean beating down at our feet, still steaming from the trek over the bridge. The air was a cooler temperature here as the wind blew in off of the ocean.

As the teens began to play like toddlers in the surf, shedding the cloak of ambivalence they try to maintain at all times, I surveyed the scene. With all respect to the architects of the water park, it simply couldn't compare. If it had been a photograph I would have claimed it to be photoshopped, with too-perfect tinting of blue-green water rolling in on the white sand. The brilliant azure of the sky was punctuated with soft puffs of white. The picture was perfectly accented by a lone ship floating regally on the horizon.

As my eyes took in the beauty, the rest of my senses were overwhelmed with this awe-inspiring scene. The faint smell of salt rolled in on the cool breeze that refreshed my sun-warmed skin. The call of the gulls could be heard sporadically over the faithful roar of the waves.

The whole of the scene filled my heart, as well as my eyes with tears, as I considered the One who created it all. How could any of this compare to the man-made park we had just left? The beauty was breathtaking; the peace that the scene brought was beyond compare.

My eyes continued to survey the wonder while watching the teens and enjoying the sound of their laughter. I began to notice another enormous contrast to the water park: where were all the people? A couple of love birds holding hands in the surf, a young girl with a scorched back building a sandcastle, and a small family seemed to be the only people at that section of beach. Where were all the people?

Back at the water park floating the lazy river, I suppose.

I grieved over how many people were missing this breathtaking sight, just feet from where they played in man-made fun.

Of course, there were no lifeguards on the beach, and warnings were posted about a dangerous current. With the majesty of the ocean came amazing power, dangerous if not respected.

When we finally wearied of jumping and playing in the surf we began the long walk across the footbridge back to the park. I glanced back at the beach, wondering how many times I have missed a scene so majestic by playing it safe. Majesty may be waiting just beyond a long, lonely walkway, through thorns and weeds.

Have I ever traded a walk with the Lord on His breathtaking beach for the safety of a go-nowhere lazy river, overcrowded with other safety seekers?

I recalled a scene in the book "The Lion, The Witch, and The Wardrobe," by C.S. Lewis where Mr. and Mrs. Beaver are trying to explain Aslan the lion to the children:

"Safe?" said Mr. Beaver. "Don't you hear what Mrs. Beaver tells you? Who said anything about safe? 'Course he isn't safe. But he's good. He's the King, I tell you."

"'Course he isn't safe. But he's good."
Is walking with my Lord safe? No, not always. Like the beach, there may be danger and trials my earthly eyes can't see or understand. I've certainly suffered my share of scrapes and bruises. But he is always very, very good.

More of Sarah's work can be found on her blog, http://www.sarahstirman.blogspot.com.

Sarah is part of The Coffee Group, a varied group of women who express their love, faith, and praise for God with ladies they love. They do ladies' retreats and special speaking on God's work in their lives, as well as the importance of sharing your faith story.

Come visit them on their blog:
http://www.espressohislove.blogspot.com

The Coffee Group is part of the Heartlight.org Network

"Safety, Beauty, and Power" by Sarah Stirman is licensed under a Creative Commons License. Heartlight encourages you to share this material with others in church bulletins, personal emails, and other non-commercial uses. Please see our Usage Guidelines for more information.

Sarah (Riley) Stirman graduated from Abilene Christian University with a degree in Elementary/ Special Education. A freelance writer, she currently lives in Abilene, Texas with her husband, Troy, their 2 children: Ashley, and Riley, as well as Duchess the chocolate lab and Stickers the hedgehog. (Visit the Author's Website)