Sometimes, it takes everything to just keep walking! 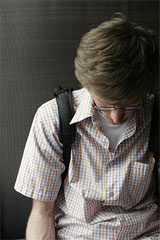 by Phil Ware (05/16/2009) | Two Minute Meditations
It was years ago, but I remember it as if it were yesterday. He was young. Too young to have to deal with this — just 19 or 20. I saw him as he approached the busy intersection near a mall in northwest Austin. He walked with one arm swinging wildly, dragging a leg, as he went. I had seen the gait before ... at the hospital ... in the physical therapy wing ... with stroke victims. He caught my eye because I had known a young man who had gone through the ordeal just a few years before and walked with a similar gait.

My fear, and the reason that I pulled off to the side of the road and watched without being noticed, was that he wouldn't make it across the busy 7 lanes of traffic during the time allotted by the light. But as the light turned green and the crosswalk light image glowed green for "walk," he took off in frenzied and rush tempo.

I found myself holding my breath as the crosswalk light image flashed yellow and then switched to the "do not walk" image. A few seconds later, just a breath or two before the light changed and the traffic began to flow again, he grabbed the light pole to catch his breath, safe on the other side. I realized that he had done this before and had the timing down perfectly. He was exhausted, but he was walking ... and living ... on his own.

Sometimes, the real heroes walk. Soaring on wings like eagles and running and not growing weary make great posters. But here, bent over resting against the stoplight standard was someone who refused — despite great hardships and difficulties — to give up. He just kept walking. He was the one who would "walk and not faint" (Isaiah 40:30-31).

I don't know where you are in your own personal challenges. I don't know what hardships you are facing right now. From messages I receive from our readers, I know some face challenges that have caused others to throw in the towel. And so today, my prayer is that you will just keep walking! Sometimes, oftentimes, the real heroes are the ones who just keep walking.

The real heroes are the ones who just keep walking.

My blog has a video and a parallel message to this. I want to encourage you to take the time to let that video inspire you! You can find it here:
http://www.heartlight.org/thephilfiles/2009/05/15/give-us-today/

You might just want to pass it along to someone who needs to know that each day you are praying that they can walk on!

"When Heroes Walk" by Phil Ware is licensed under a Creative Commons License. Heartlight encourages you to share this material with others in church bulletins, personal emails, and other non-commercial uses. Please see our Usage Guidelines for more information.