Last Will and Testament

What did you get in the will? 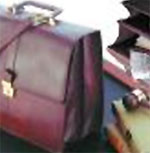 by Alan Smith (06/24/2007) | Timely Truths
The following illustration comes via eSermons.com, and provides us with an interesting insight:

In 1926, a wealthy Toronto lawyer named Charles Vance Millar died, leaving behind him a will that amused and electrified the citizens of his Canadian province. Millar, a bachelor with a wicked sense of humor, stated clearly that he intended his last will and testament to be an "uncommon and capricious" document. Because he had no close heirs to inherit his fortune, he divided his money and properties in a way that amused him and aggravated his newly chosen heirs. Here are just a few examples of his strange bequests:

He left shares in the Ontario Jockey Club to two prominent men who were well known for their opposition to racetrack betting.

He bequeathed shares in the O'Keefe Brewery Company (a Catholic beer manufacturer) to every Protestant minister in Toronto.

But his most famous bequest was that he would leave his fortune to the Toronto woman who gave birth to the most children in the ten years after his death.

Jesus Christ had a will, too!
This last clause in his will caught the public fancy — concerning the woman who produced the most children over a ten-year period. The country was entering the Great Depression. As people struggled to meet even their most basic economic responsibilities, the prospect of an enormous windfall was naturally quite alluring. Newspaper reporters scoured the public records to find likely contenders for what became known as The Great Stork Derby. Nationwide excitement over the Stork Derby built quickly.

In 1936, four mothers proud producers of nine children apiece in a ten year time span divided up the Millar fortune, each receiving what was a staggering sum in those days, $125,000. Charles Millar caused much mischief with his will. This was his final legacy to humanity.

In sharp contrast to that, Jesus Christ had a will and a testament, too. However, Jesus' will did not bring mischief, but life ... and brought life to many.

What Jesus offers in his will is more valuable than the hundreds of thousands of dollars that Charles Millar left behind. He offers life now that is rich and full as well as life with him without end.

And what is most wonderful is that the blessings he offers are not available only to a handful of people — people who qualify for the prize because they've earned it somehow — but he offers his treasure to everyone who is willing to truly follow him and want to receive the ransom, forgiveness, grace, and life set forth in his will.

For this reason Christ is the mediator of a new covenant, that those who are called may receive the promised eternal inheritance — now that he has died as a ransom to set them free from the sins committed under the first covenant. In the case of a will, it is necessary to prove the death of the one who made it, because a will is in force only when somebody has died; it never takes effect while the one who made it is living (Hebrews 9:15-17 NIV)

"Last Will and Testament" by Alan Smith is licensed under a Creative Commons License. Heartlight encourages you to share this material with others in church bulletins, personal emails, and other non-commercial uses. Please see our Usage Guidelines for more information.