How much would Mildred Budge commit? 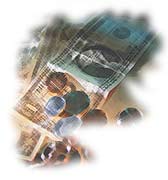 All the women who owned fur coats did not wear them to church on Commitment Sunday. It was a mostly universal response to the challenge to write down one's financial pledge to the Church — or was it to God? — for the coming fiscal year.

Mildred Budge did not own a fur coat, not because she couldn't afford one or want one. There were days when Miss Budge intensely coveted a fur coat so that she could sit on the sofa in her living room and watch Joan Crawford movies, because, Joan and her sisters-in-cinema, knew how to wear a fur coat. And rhinestones. And shoulder pads. And eyebrows. And watching old movies where the stars wore them was really the only time and place that Mildred Budge could actually see herself wearing one for Mildred Budge was an old-fashioned church lady and while she might wear an inherited mink stole, she wouldn't spend money on a fur coat that could be invested in missions instead.

Besides, Mildred Budge had lived long enough to know that she wasn't glamorous — didn't look like Joan Crawford or Grace Kelly. Mildred Budge looked like other church ladies do mostly year round: a little pear shaped, with hair that was curled, and, occasionally, it went gray but not for long.

Every woman and her sister dressed up for Easter Sunday. Not Mildred. She wore her Easter dress the Sunday after, because a woman could find a two-hundred-dollar dress for half price then, and knowing that she would always want a good dress in the springtime, Mildred predicted that her Easter-dress savings could become her Faith Promise pledge.

That wasn't the way the Faith Promise plan was proposed at church.

Mildred Budge had long since given up trying to memorize the formula for having faith that God would supply an extra abundance of money for missions through His members, and when He did, that was supposed to become one's Faith Promise pledge. Only when you filled out the small blue card that was handed out after the missions conference week when everyone was fired up about evangelism, you sat there holding that pencil waiting for the revelation or inspiration to fill in the dollar amount, and Mildred's faith didn't produce that number. Her hopeful reasoning did. She had a lively and reasonable faith that God would give her an Easter dress the week after Easter and that she would save enough in her dress budget to allocate for the Faith Promise fund. It was a kind of backhanded way of participating in this church activity, but it was Miss Budge's way.

Grace wasn't for sale or trade.
The annual pledge made on Commitment Sunday was different. That was a standard ten percent — before taxes. Your basic tithe. But Mildred didn't like the legalism of that word any more than she liked the words "fiscal year" since any Christian worth her salt or the price of a ruby could tell you that God didn't measure time that way — never had. How did God measure, Mildred wondered. A tithe was a good way to start but not a definitive answer if you were talking about the Master of the universe who had exhaled His own life-giving breath into you, put shoes on your feet, regularly gave you a good spring dress each year just as if you were a lily of the field, and stocked Blue Bell ice cream in your freezer when it was buy one, get one free at Foodworld.

Mildred Budge agreed with the priests of the Old Testament that a tithe was a given. But ten percent of her annual income felt dry, uninspired, joyless, and when you dressed down in order to write down the words, the pledge felt oddly — and she wasn't judging others — legally accurate and illegitimate all at the same time. God knew her bank account and the state of her wardrobe and, more significantly, what security felt like to her and what generosity felt like to her and how she understood that when He blessed her, it was in streams of joy — a kind of manna from heaven — that didn't have a real price tag the way real art doesn't though people put prices on it to trade it. Grace wasn't for sale or trade.

So Mildred dressed up on Commitment Sunday because she loved any kind of ritual that encouraged family members in a church to think about the family budget. Miss Budge owned a rhinestone pin too big for her blouse, so she attached it to her purse, and she was careful with her eyebrows — not Joan Crawford bold — but fully alive, I've-got-my-wits-about-me eyebrows, though her hand trembled a bit when she took up the small pew pencil.

When she confronted the pale blue pledge card with the little lines and squares to check, Miss Budge obligingly wrote down ten percent, like always. Then, she thoughtfully added a plus sign (okay, it was a cross), and because she was sentimental (and why had they decided sentiment was a second-rate attitude in church?), the old spinster drew a heart around the cross. Hers. And then, in the spirit of renewing her vows of faith, the church lady signed her name one more time: Mildred Budge.

"Commitment Sunday" by Daphne Simpkins is licensed under a Creative Commons License. Heartlight encourages you to share this material with others in church bulletins, personal emails, and other non-commercial uses. Please see our Usage Guidelines for more information.

Daphne Simpkins has written over two hundred essays and stories appearing in a variety of national periodicals including The Chicago Tribune. Her memoir The Long Good Night was excerpted in The Christian Century and is available through Amazon, www.eerdmans.com and other bookstores. Merry Christmas Miss Budge! is offered digitally through AmazonShorts. Miss Simpkins teaches writing at Auburn University Montgomery and is a member of the Alabama Humanities Foundation Speakers Bureau.