Are you telling the truth ... the whole truth? 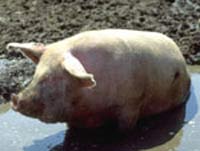 by Steve Higginbotham (06/24/2006) | Special Features
Maybe you've heard about the man who came to a country church building one afternoon and asked to speak to the preacher. The man stated that he and his family were poor and hungry, and he confessed to stealing a hog to feed his family.

However, the guilt of his action pricked his conscience, and he said he couldn't eat it as much as he would like to. So he offered to give the hog the preacher.

The preacher said, "Why sir, I don't want it. You need to take it back to the man you stole it from."

The poor man said, "I tried to take it back to him, but he said he didn't want it."

The preacher then said, "Well, then you should keep it, feed your family with it, and have a clear conscience."

Jesus calls us to a more noble way of life.
The man thanked the preacher for his time and left his office. It was only later, at the end of the day that the preacher discovered that his hog had been stolen.

Friends, there's a difference in relating "true facts" and "telling the truth." The Pharisees of the first century had developed quite a system that salved their consciences while they were being less than honest with people (Matthew 23:16-22). I'd also say that our society isn't far behind in the way that "a lie" is frequently manipulated to be "the truth."

Jesus calls us to a more noble way of life. Our lives should be the epitome of integrity. Speaking the truth, without deception and deceit is liberating! No games, no need to remember what was said to whom, no fear, no contradiction, etc. Just the truth! Give it a try! After all, for the Christian, honesty is not the best policy, it's the only policy!

"Perfectly Honest" by Steve Higginbotham is licensed under a Creative Commons License. Heartlight encourages you to share this material with others in church bulletins, personal emails, and other non-commercial uses. Please see our Usage Guidelines for more information.