WIll you give thanks, even for the leftovers? 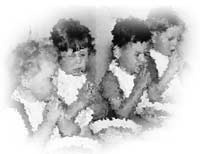 by Jamie Shell & Brent Nidiffer (11/25/2005) | Timely Truths
A good king in Spain known as Alfonso XIX learned that the boys who served in his court were forgetting to pray before their meals. So he decided to teach them a lesson. He gave a banquet and invited them to attend. Midway through the dinner, a ragged beggar came in, sat down, and began eating ravenously. When he was finished, he went out without saying a word.

"That ungrateful wretch ought to be whipped," shouted the boys. "He ate the king's food and never showed gratitude."

Quietly, the king rose to his feet, and silence fell over the group. "Daily you have taken the rich blessings of life from the hand of your Heavenly Father," said the king. "You've enjoyed His sunshine, breathed His air, and eaten His food. All these things He has graciously provided, yet you have not bothered to say 'thank you' for any of them. You are more ungrateful than that beggar."

We accept them as commonplace.
Unfortunately, we often take for granted the blessings that God has so generously provided. Like the boys, we accept them as commonplace — dare say, we think they are deserved — rather than the special gifts of heaven's grace that they are. During this holiday season, we should carry the same attitude as the Psalmist who wrote, "Thank the Lord because he is good. His love continues forever. That is what those whom the Lord has saved should say." (Psalm 107:1-2a NCV)

As you finish your Thanksgiving leftovers with family and friends, don't forget to take the time to be grateful to the King for what He has given to you.

"Thankfulness" by Jamie Shell & Brent Nidiffer is licensed under a Creative Commons License. Heartlight encourages you to share this material with others in church bulletins, personal emails, and other non-commercial uses. Please see our Usage Guidelines for more information.