Tears of My Father

Have you heard God cry? 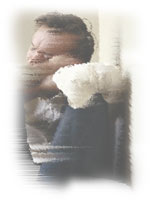 When Israel was a child, I loved him,


and out of Egypt I called my son.

By my reckoning, I've seen my father shed tears four times in my nearly-thirty-seven years.

It's not that Dad is distant or afraid of expressing emotions. He isn't. I guess tears just don't come easily for him. The first time I remember him weeping was twenty-five years ago now, at his mother's funeral. He cried at his father's funeral. And the first time he laid eyes on his grandson seven years ago, those eyes were brimming over with tears.

I said four times. The other time was my fault.

It was when I was in college, and my grade report came home. In those days I wasn't a very serious student. Let's just say there were lots of places in Searcy, Arkansas, that I knew better than the Harding University library. Actually, I hadn't been a very serious student for a lot of years before that, much to my parents' consternation. Report card time had long been an unhappy time in our house, and my grades had often provoked my dad's frustration and anger.

Never tears. Until that time.

I expected his usual disappointment with my performance. I expected the usual lecture about how I wasn't doing my best. I expected it and knew I deserved it. He would have been justified. But that's not what happened.

Instead, he teared up. He told me about his own lack of concentration and diligence in college, and told me that it hurt him to see me making the same mistakes he had made. Now, I can't honestly say that my grades or work habits improved much after that. I think the bad habits I had developed were a little too ingrained by then. But I can say he got my attention. I don't remember the lectures the other times I brought home bad grades. I don't remember the punishments too well. But, fifteen years or more later, I remember that conversation, I remember my dad's tears. And I remember that he shed those tears because of his love for me.

Look again at the book of Hosea.
I don't think it's over-generalizing to say that when it comes to their kids, moms cry at the drop of a hat. On nearly any special occasion, you can count on a few tears from Mom. If their kids are hurt, or if their kids hurt them, mothers will shed some tears. But for most dads to cry, it takes something big. It takes strong feelings to coax tears from most dads.

If your dad weeps over you, it's because he loves you deeply.

Out of all the passages in the Bible that talk about God doing something, I couldn't find any that describe God weeping. Jesus is described as weeping twice: once at his friend Lazarus' tomb and once in the Garden of Gethsemane on the night of his arrest. But this absence of any reference to God's tears doesn't mean that God doesn't care about us. A lot of us need a revolution in this aspect of our understanding of God.

I'm afraid that too often Christians project an idea of God that makes him look like Mr. Spock from Star Trek: dispassionate, aloof, and coldly logical. We picture him sometimes as an observer, looking at our lives and our predicaments from something of a distance. He's interested, of course, but interested in the way a scientist is interested in a lab animal. Sometimes our words about God and our actions indicate that we don't think God has much connection with us. Oh, he provides us with the things we need. He watches over us. Cares for us. We believe he forgives our sins; we just sometimes seem to believe that he forgives grudgingly. We seem to doubt sometimes that he has any personal interest in us all.

And when we're not good? When we sin? Well, many of us imagine God with his arms crossed and his face set angrily. We picture him barely restraining himself from disowning us, or worse.

If that's your picture of God's feelings toward you, then look again at the book of Hosea. God is angry with his people. He's hurt by their unfaithfulness. He talks about how he's helped his people to walk, how he held them by the arms while they took their first toddling steps. When they fell and got hurt, he was there with a bandage. He was there to feed them, reassure them, comfort them - and they forgot him.

"Tears of My Father" by Patrick D. Odum is licensed under a Creative Commons License. Heartlight encourages you to share this material with others in church bulletins, personal emails, and other non-commercial uses. Please see our Usage Guidelines for more information.