Where do you find your hope and joy? 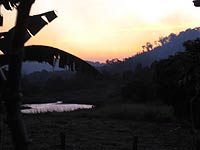 by Joe Bagby (04/16/2005) | A Taste of Home
Last week, I was meticulously putting together a slide presentation for my daughter's wedding. I had 165 pictures before me and a mountain of a project to scan the pictures, edit them, place them into PowerPoint, and ensure that every picture was flawless and the best quality possible.

As you might expect, I ran into some difficulties. Some of our pictures were from twenty years ago and ten thousand miles away. They had been carted all over the world and it seems a million miles had been traveled since we arrived at this place in our lives. I was doing well until I began to look into the faces of my little darlings when they were two and three years old. As the process of putting the pictures into some order developed — and as I watched the girls grow older before my eyes — I could see the remarkable change God had brought into their lives.

You see, Hope and Joy's life did not begin like most children. They didn't have a mother or father to cuddle them and sing songs to them in the night. They didn't have anyone to whisper "sweet nothings" in their ears and mention the name of Jesus to them through the stories of Abraham, Moses, David, and Paul. No, they were abandoned to a small crib for one year with no one to care for them! That is, until one day God directed a missionary wife to visit an abandoned baby ward at Children's Hospital in Bangkok, Thailand. That's when it all began — that's when Naree and Nittiya became Hope and Joy.

Isn't it amazing how God works?
My wife, Paula, gave them those names because she believed that that's what they needed the most. Nittiya wasn't as desperately sick as Naree, but she never smiled or laughed — so Paula named her Joy! Naree was desperately ill — one year old and weighing 6 pounds — and wasn't supposed to live. So Paula gave her the name of Hope! Nothing has been the same in our lives since that day 22 years ago. Joy and Hope have become just that for Paula and me. Isn't it amazing how God works?

But that's not the end of the story. Something came over me last week as I reflected on Hope and Joy, and I just started crying. I picked up the phone and called them and in tears I told them how much I loved them — and would always love them! My hope for them is they will soar on eagle's wings ... but if not, at least run and not grow weary ... but if not, walk and not be faint. Because you see, they have the hope and joy of Almighty God. Who could ask for more? I know we couldn't, because of the Hope and Joy that the Father in heaven has brought to our lives!

"Hope and Joy!" by Joe Bagby is licensed under a Creative Commons License. Heartlight encourages you to share this material with others in church bulletins, personal emails, and other non-commercial uses. Please see our Usage Guidelines for more information.

Joe Bagby has been preaching for thirty years. He and his wife Paula were missionaries to Thailand in the 80's for eight years where they adopted twin girls, Hope and Joy. Joe receive his masters degree in Congregational Ministry from Abilene Christian University with a BS in Education from University of North Texas. He is now serving as Pulpit Minister for the 4th and Elm Church of Christ in Sweetwater, Texas.