Can you find harmony in this diversity of sound? 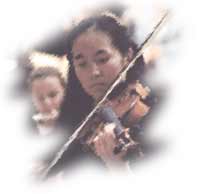 by Joey Cope (03/13/2005) | Special Features
Fragments of intensified light burst on his every turn. His costume — made for the spotlight — took every advantage of the barrage.

His song was well-chosen. It suited his voice and his look. The audience surged with his presentation. Clearly, the singer was magnificent. Yet, as impressive as his vocal performance, I found my attention drawn to the individuals silhouetted in the side lights.

The outline of a string quartet emerged. A violin, a viola, a cello, and ... a guitar. This is west Texas, after all.

I spent little time considering the guitar player. He was seated further back and it was like he was pulled back into the darkness of a cavern. The notes from the Gibson were dark like him. An essential part of the sound picture, but subdued. Mid-lighted were the other three.

I leveled the binoculars and spun the focus ring until the edge of the cello became clear. The cellist bent over his instrument, intent on the sheet music before him as his fingers pressed down on the neck and his bow sailed just above the bridge of the cello. A low tone traced his movements.

Far to his left, sat the violinist. Her small, wooden soundbox was perched high between shoulder and chin. Her fingers arched gracefully. The high notes vibrating from her strings pushed through the others. Singular and clear, her music gave a loftiness to the whole experience.

Alternately, I considered the cellist and the violinist. His eyes were penetrating and saw nothing beyond his music stand. He shifted in his chair only to bring yet another chime from his repertoire. She, on the other hand, was quite animated. Fingers moving nimbly, her bow energetic. As I watched, first one and then the other, I realized a certain oneness to their performance. While obviously diverse in the notes and instruments they played, their faces could have been interchanged. Brows furrowed in concentration, they plied their craft with little emotion.

The throaty song of the viola slowly floated through the air. Tuned a fifth below the violin, the viola has always drawn me with the breadth of its voice. While obviously a harmonic support, tonight the smooth tones surfaced as a melody. I trained the lenses in on the viola player. And my gaze never left her until the lighting director plunged the entire coliseum into darkness.

She was different from the others. While the violin and the cello moved splendidly and incessantly, the music from the viola seemed to breathe. And when that breath was taken, the viola player glanced to her left or her right, gaining confidence and inspiration from the music spilling around her.

Wouldn't it be wonderful?
You've got to love that. Twenty feet from her, the singer belted his way through a magnificent number. Thirty feet away the sea that was the audience began. Ripples of response to the singer interrupted the surface of that ocean. To her right and left, the violin and the cello were locked into their craft. And the guitar player played from behind her in that cave.

Only for me, the crescendos and climaxes of that concert were when she smiled. It was in those small moments that my spirit soared. I was lifted to see someone who drew great enjoyment from the efforts of those around her. The warmth of her smile and the flash of her eyes are still with me. It was as if she was offering her gratitude and congratulations to her colleagues as the measures of music moved on.

Strangely, I don't remember what she looks like. Nor can I picture the spotlighted singer. Or the song he sang. But I remember how the viola player seemed to bloom. Wouldn't it be wonderful if we could, like her, celebrate the songs of others even when our own song is superb? Wouldn't it be grand if we recognized the harmony in the diversity around us ... and smiled?

How wonderful it is, how pleasant, when brothers live together in harmony! (Psalm 133:1 NLT)

"The Viola Player" by Joey Cope is licensed under a Creative Commons License. Heartlight encourages you to share this material with others in church bulletins, personal emails, and other non-commercial uses. Please see our Usage Guidelines for more information.