Another Reason Not To ...

Why would anyone do that on national television? 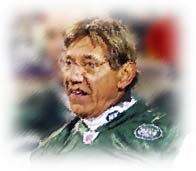 by Rubel Shelly (12/18/2004) | Special Features
Joe Namath has joined the growing ranks of ex-boozers who tout the benefits of sobriety. Given the family breakups, highway carnage, and workplace losses that can be traced to alcoholism, I wish him success — first for his own recovery and then for the ability to influence others toward a new lifestyle.

As the flamboyant quarterback of the New York Jets in their glory days of the 1960s, Broadway Joe was the Big Apple's most famous pub crawler. He was legendary for the ability to party, shake off his hangover, and win a big game.

The end of his playing career did nothing to slow his drinking bouts. If anything, they only became worse. Oh, he'd swear off for a while — only to fall off the wagon with a vengeance. Interviewed almost a year ago now on national TV by ESPN's Suzy Kolber, a clearly intoxicated Namath told her, "I want to kiss you!" He said it not once, but twice. He checked into rehab shortly afterward.

I thought of Joe and his drinking buddies last week. I read of two men who robbed the pastor of a Kansas City church. One of them asked to talk with the pastor after a Wednesday-evening Bible Study. When the two men got to his office, they were joined by a third. "I knew I had a problem at that point," said Tony Caldwell. "They both smelled of liquor, and their eyes were all bloodshot."

It turns out that both men had been kicked out of a program the church runs to help people who are homeless or recently out of jail. They insisted they were serious about the robbery. "It's up to you," the second guy said. "I mean, your congregation could get shot up or your church could burn down!"

Since their victim was short on cash, he offered to write each man a check for $150. They liked the idea. And they waited for him to write them — helping him with the correct spelling of their names. (Guess how the police identified them!)

Every drunk has stories. And they're really funny! Except for the victims. The aftermath. The jail time. The family breakups. The bankruptcies. The fights. The lost jobs. The alienated children. The cirrhotic livers. The lonely deaths. Come to think of it, maybe "the lovable drunk" is only a fictional character.

They liked the idea.
So congratulations to Joe Willie Namath on his new path. I hope a couple of guys in Kansas City can get on the same one. Maybe you have a friend you could encourage to get help before he dies of his or her addiction.

And if something inside you tells you the meaning of the upcoming holidays is in a bottle, it would be a good idea to visit an open meeting of A.A. tonight.

Mark out a straight path for your feet. Then those who follow you, though they are weak and lame, will not stumble and fall but will become strong.(Hebrews 12:13)

"Another Reason Not To ..." by Rubel Shelly is licensed under a Creative Commons License. Heartlight encourages you to share this material with others in church bulletins, personal emails, and other non-commercial uses. Please see our Usage Guidelines for more information.