What is the story behind this picture? 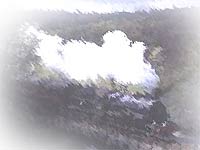 by Elizabeth Price (12/16/2004) | Special Features
The snapshot had remained hidden away in a cupboard for about fifty years. It was a picture of an old steam engine that ran regularly through the county locomotive depot.

Nobody was interested in it at the time, but it was unearthed and given to a railway driver. This driver had begun work at the county depot, although he now lived far away and came back only when he brought freight trains through. However, he was trained in the ways of steam and the picture reminded him of his early days. The picture reminded him of a time that would never occur again; nearly all long distance trains are now fueled by diesel.

The driver was thrilled to have the old snapshot. He even had the snapshot copied. He then gave the copy to a retired driver who had worked with him back in those "good ol' days."

"This is history!" exclaimed the retired driver. He was so thrilled to see the old picture that he had his copy duplicated and then he gave that copy to the local museum.

A few days later, the train driver was back at the station and reported to the freight office there. He was delighted to see another copy of the old photo framed and hanging on the office wall of the freight company for whom he had worked for so many years. It was a way to remember and relive a special time in history that will not occur again in quite the same way.

Let us treasure this baby in a manger as the official announcement of the day that "God so loved the world that He gave His only Son." (John 3:16 NLT)

"The Picture" by Elizabeth Price is licensed under a Creative Commons License. Heartlight encourages you to share this material with others in church bulletins, personal emails, and other non-commercial uses. Please see our Usage Guidelines for more information.