How bad have you messed up? 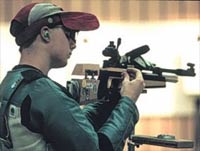 by Phil Ware (08/30/2004) | Two Minute Meditations
As they started the final round, Matt Emmons was a few points behind the leader in the Olympic 50 meter three position shooting final. Emmons wasn't worried. After all, even at his young age, he is a seasoned and skilled shooter. He had already won one gold medal in this year's Olympics. As the final round progressed, he was shooting very well, gradually overtaking the leader. He needed only to be fairly close on his final shot to win the victory because of his 3-point lead.

On his final shot, Matt steadied himself, working on staying calm. When the time came to fire, he gently squeezed the trigger and sent the shot toward the center of the target. Only his shot didn't register on the correct target. He looked bewildered. Then the grim news was given to him. He had shot at the target one lane over from his own. He shot the wrong target. His final shot was ruled a complete miss and he dropped from a certain gold medal to 8th place.

I will never forget the look of bewilderment when Matt fired and his shot didn't register. Then there was the look of hapless resignation as the judges informed him of what had happened. It made me sick at my stomach for him. So much work, so much skill, and then have it all slip away with such a costly and horrible mistake — a huge, public error. He had overcome so much — he wasn't even shooting with his own highly specialized and expensive rifle because someone had sabotaged it.

I now have a whole new image when I think of the word "sin" that is used in the New Testament. This word (hamartano) means to "miss the mark." Matt Emmons knows about that. Even though he is recognized at a young age as a premier target shooter, he missed the mark in an embarrassing and humiliating way.

Many of us know about missing the mark as well. While we will occasionally find ourselves trapped in a sin because of willful rebellion, most seasoned Christians stumble most frequently when they misjudge a situation, put themselves in a vulnerable position when facing temptation, or cut themselves loose from the support and accountability that helps reinforce good moral judgment. Their intent isn't outright rebellion, but weakness or carelessness gets the better of them and they "miss the mark."

Sometimes that sin, their "missing the mark," is public — embarrassing themselves and those they love. Often it is a private sin. Either way, it must be dealt with appropriately so that they don't lose their way and become entrapped in slow spiral that leads to total rebellion. (Hebrews 3:12-14) Thankfully, God has given us grace to not only have our sin forgiven, but to purify us and restore us to a holy relationship with him. We may not be able to control the public revelation of our sin, but with God, we can have another shot at the target. Matt Emmons wasn't so fortunate. My hope is that his miss won't deter him from being all he can be in the future. I know that is what our Heavenly Father hopes for us as well!

Many of us know about missing the mark.

If we say we have no sin, we are only fooling ourselves and refusing to accept the truth. But if we confess our sins to him, he is faithful and just to forgive us and to cleanse us from every wrong. If we claim we have not sinned, we are calling God a liar and showing that his word has no place in our hearts. My dear children, I am writing this to you so that you will not sin. But if you do sin, there is someone to plead for you before the Father. He is Jesus Christ, the one who pleases God completely. He is the sacrifice for our sins. He takes away not only our sins but the sins of all the world. (1 John 1:8-2:2)

"Missing the Target" by Phil Ware is licensed under a Creative Commons License. Heartlight encourages you to share this material with others in church bulletins, personal emails, and other non-commercial uses. Please see our Usage Guidelines for more information.