You Can't Do That!

So it can't be done? 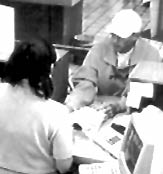 A man, wanting to rob a downtown Bank of America, walked into the branch and wrote "This iz a stikkup. Put all your muny in this bag."
While standing in line, waiting to give his note to the teller, he began to worry that someone had seen him write the note and might call the police before he reached the teller window. So he left the Bank of America and crossed the street to Wells Fargo.
After waiting a few minutes in line, he handed his note to the Wells Fargo teller. She read it and, surmising from his spelling errors that he was not the brightest light in the harbor, told him that she could not accept his stick up note because it was written on a Bank of America deposit slip and that he would either have to fill out a Wells Fargo deposit slip or go back to Bank of America.
Looking somewhat defeated, the man said "OK" and left the Wells Fargo. The Wells Fargo teller then called the police who arrested the man a few minutes later, as he was waiting in line back at the Bank of America.

With all the stories going around, you have to wonder if one of the qualifications of being a bank robber is having an IQ lower than the temperature in Minnesota in January. He actually believed the teller when she said he couldn't do it! What a dummy!

Before I get carried away, though, how many times have I been "dumb" enough to believe somebody when they told me something couldn't be done? "We tried that once before, and it just didn't work!" "You're wasting your time!" "It'll never work!"

If we listened to everyone who told us what "can't be done", we'd never accomplish anything. How different was the attitude of Paul:

"I can do all things through Christ who strengthens me." (Philippians 4:13)

"You Can't Do That!" by Alan Smith is licensed under a Creative Commons License. Heartlight encourages you to share this material with others in church bulletins, personal emails, and other non-commercial uses. Please see our Usage Guidelines for more information.