Window to the Heart of God

Can we know how God felt when His Son died? 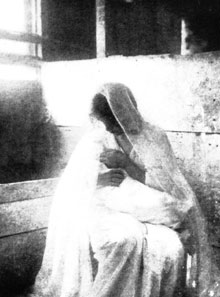 by Phil Ware (05/10/2004) | Two Minute Meditations
I want you to join me at the window of grace. Its frame is old and battered. The scene on the other side of the panes is one we've viewed many times. Yet for some reason, we so seldom really see what is in this picture. Is it out of focus? Is there something we're missing as we view it? Is it a bit dingy and hard to see through its old panes in the failing light?

For sure this picture is lacking rich color. It is not touched with dancing light that sets off varied shades and brings nuanced richness and color. The muted colors in this picture are nearly all earth tones — browns, grays, beiges ... except for red. Unfortunately there is way too much red in this picture. Battered, splattered red!

Raise this window; you will see Mary - Mary the mother of Jesus, the wife of Joseph, the mother of James and the rest of Jesus' brothers and sisters. We're not quite sure what to do with Mary. Some choose veneration. Others simply choose avoidance. Yet Mary is in Scripture playing a vital role in God's greatest drama played out on an earth tone set, punctuated with splatters of deep, rich hues of red. If we allow her, she can become our window into the heart of God. She accepts her role with a grace far more costly than I'm sure she imagined, "I am the Lord's servant," she had said, "may it be to me as you have said."

In the middle of all the joy of new life and the hard journeys to the manger of Jesus' birth and then Temple of his announcement, Mary helps us feels the ominous anticipation in God's heart. "And a sword will pierce your heart!" Behind every toddle of her baby, beneath their escape to Egypt, and between each wood shaving thrown off by his apprentice carpenter's plane, Mary carries the burden of mystery. She already feels wounds of a future and brutal glory. Did each skinned knee of her Messiah-son carry a deeper wound for her? Did each splinter evoke in her an unknown stirring pain? As Luke hauntingly reminds us, she treasured each memory in her heart. Events of a later day would awaken and cross-touch each memory. Mary had so much to ponder in her heart as she partnered with God in costly redemption.

Mary played a key role in God's miraculous journey as one of us mere mortals. Her place as Jesus' mom is full of mystery. Questions abound. Did she and Jesus share a special love? Did she tell him of her experience with the angels? ... of Joseph's confusion at conception? ... of the manger in Bethlehem? ... of the gifts of the Magi? ... of the escape to Egypt? Did she come to laugh at the telling of the Jerusalem journey story, when her Jesus stayed behind and gave them all a scare? Or did she simply cherish each moment of his blossoming manhood, his deepening godliness, and his growing affection for people? Mary's experience is real to our human experience, yet points to a distant divine heart that shared each moment with her.

Mary's journey with Jesus also included the wounds that almost every mother endures. Jesus' words had to cut her heart as he told her, "What is that to me and to you, woman?" This word of impatience, though possibly deserved, doesn't seem appropriate to a mother's ears. Why was he waiting, the Messiah-child whom God had sent? She knew he was destined for something special. You can hear it in her instructions to the servants at the wedding in Cana even before Jesus' ministry began: "Do whatever he asks of you!" Never the less, the words would still hurt.

Then there was the rivalry of Jesus' siblings who didn't believe in him until after the resurrection. Their mocking words to him surely had to sting her as well. Then there were the times when she knew her son was overspending himself serving the incessant crowds with their burgeoning needs. She sent for him through his brothers, who shared her concern that he had lost his mind in his love for the crowds.

And then there were his most painful words of all. She had come to see her son, but Mary and her other children couldn't get to Jesus through the crowds. "Your family is here!" someone shouted to Jesus. Jesus paid them no attention and replied, "Who is my family - my mother, my sister and my brothers? The one who does the will of God is my mother, my brother, and my sister!"

But these were not the most hurtful words Mary endured. A week after seeing her son joyously welcomed to Jerusalem with cries of "Hosanna!" she felt the biting sting of each syllable as the crowd ranted, "Crucify him! Crucify him!" Through his horrible ordeal, she stayed close. Close enough to hear the mockery, the taunting, the jeering, the insults, the cruelties, the sound of the nails being driven into the hands she once cradled in her own, and the last sighs of her dying son.

She was close enough to hear the soft and tender words of her battered and dying boy as he passed her into the care of the beloved disciple. "Woman, behold your son! Son, she is your mother." In his dying moments, his concern was for her.

As he whispered, "It is finished," her work seemed done, too. Her motherhood to the Son of God, who also happened to be her little boy Jesus, seemed done.

Then the soldier at the foot of her son's cross put it all in perspective. "Truly this was the Son of God!" Yes, Jesus was Mary's little boy, but he was also, most certainly, God's Son. We can never truly know how it felt for God to send Jesus to earth — to watch him serve and bless, and then to see him rejected, humiliated, and murdered. God was powerful enough to stop it, and yet gracious enough to endure it. He withheld his hand. He did it for us. How can we understand that? While others have had their sons sacrificed, only God could have prevented his Son's sacrifice. He made the very people who mocked his precious son. He chose the genes for each soldier and knew them from their mother's womb. He knew the fingerprints that held the hammer and drove in the nails. We cannot truly know, understand, grasp, or fathom the heart of God — God Almighty who chose in this moment to be God All Gracious as he let his Son die alone in humiliation.

On the other hand, Mary helps us understand. She is our window to the heart of God. God chose this to be so. It was His plan — His way to offer promise and hope after the sin in the garden. So we can glimpse the pain of God the Father by recognizing the journey of Mary. We can grasp more clearly the agony of rejection of God, because we ache with Mary at the rejection of her child. We can catch a hint of the Creator's heartbreak as we feel the wounds of a mother who could not be comforted in the death of her oldest child. She stayed there and watched all, seeing every cruelty dealt her son ... and heard it all, every ugly word uttered in mockery and derision ... and felt it all in her soul ... as did God.

So Mary can become for us a window to the heart of God. After all, this was God's plan: take the woman's offspring, at just the right time, and deliver all of us who have been kept in bondage by the cruel rule of hell's serpent. And through this window into the heart of God, we see God's plan, his drama of redemption unfold ... for us.

God sent.
He emptied heaven of its glory to share it with us.

Jesus surrendered.
"Not my will, but yours be done." he had said and lived!

So we can be saved!
Salvation is for us — you and me! And for others! For everyone!

Mother's Day is a national day of remembrance. Yet for us as Christians, there is a deeper remembrance when we are touched by the reminder that every mother shares in this divine partnership with God. We thank you! Like Mary, you have played your role and helped us come to see God more clearly.

So we can be saved!

"Window to the Heart of God" by Phil Ware is licensed under a Creative Commons License. Heartlight encourages you to share this material with others in church bulletins, personal emails, and other non-commercial uses. Please see our Usage Guidelines for more information.