What has repentance led you to change? 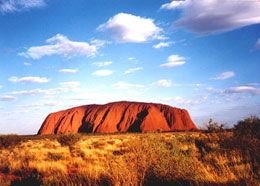 Most weekdays, rocks arrive at Uluru-Kata Tjuta National Park in Uluru, Australia. Some are nothing more than bits of gravel. Some weigh as much as 75 lbs. But rarely does a day go by without at least one.

All of the rocks come from tourists to the park's most famous attraction, the huge red sandstone formation called Uluru — better known as Ayers Rock. The stone, which in shifting light can seem to change color from reddish-orange to deep red, is considered sacred by the Anangu, the Aboriginal tribe that owns it. But over the years, tourists from all over the world have taken to chiseling out chunks of the holy site to keep as souvenirs of their visit. Recently, however, hearts have begun to change.

Some return the rocks for superstitious reasons: one man included a note with his that said, "Please return to Uluru — six years' bad luck is enough." Others return rocks after gaining a new respect for aboriginal culture. One man, referring to the Australian government's unwillingness to apologize to the Aborigines for the mistreatment they've suffered at the hands of whites, wrote, "Please return these rocks home as a symbol of one white man's attempt to make amends for my people's past." His note went on, "Even if our leader is not sorry for what we have taken from you, I am." Some simply write that they are motivated to send back their pieces of Uluru out of sadness and guilt.

Whatever the reasons, dozens of boxes of "sorry rocks" now clutter the park office. Officials aren't yet sure what they'll do with them all, but they say they welcome them as evidence of a growing sensitivity to Aboriginal culture and a growing conviction that white people have been wrong in their treatment of Australia's first inhabitants.

Repentance is a tricky thing; a very personal act that often results in very public acts of contrition. Without the personal conviction of guilt and decision to make a change, any public acts of repentance are at best legalism and at worst hypocrisy. But, if personal conviction is not accompanied by observable action, then how real is it? "Produce fruit in keeping with repentance," John the Baptist warned the crowds that came to hear him preach. "Don't come here expecting a free pass from God's imminent wrath, and don't come waving your religiosity under God's nose." He demanded that greedy people begin to share, not just regret being greedy. He ordered tax collectors to stop collecting more than they should instead of just feeling guilty about their extravagant lifestyles. He told soldiers not to use their power to extort money — to be content with their pay. Repentance should motivate a change in behavior even if that change is inconvenient or uncomfortable. Anything less is not repentance at all.

My fear is that repentance is such a religious, even liturgical word, that it no longer has any meaning outside the walls of a church building. We go to church, and at the appropriate time in the worship service, we feel sorry for our sins. Then we're reassured of God's grace and the efficacy of Christ's work to forgive us. We rejoice and praise God, and then we go out unchanged to lives that look the same on Monday morning as they did the previous Saturday night. We celebrate God's grace to the penitent, but perhaps we aren't that penitent. Perhaps we're just grateful to be able to pull a thin cloak of religion over secular lives for another week.

The prodigal son came around because he was tired of being hungry and dirty and longed for his father's house. Zaccheus was moved by Christ's undeserved loved and acceptance. The thief on the cross saw his sinfulness in stark contrast with Christ's innocence. Sometimes people are brought to repentance when their behavior hurts someone they love or when their lives are gutted by their sin. But however someone comes to repentance, there are always a few elements in common. There is stunning, crushing guilt and sorrow as the light of God's holiness and love exposes our sins for what they are. There is a longing to have those sins removed, to be clean and pure and righteous again. And there is a resolve to put aside the sins that have caused us such regret and pain and to live differently.

For such people God always has open arms. The Cross both calls us to repentance and sends us away forgiven. But, it's never easy or neat or painless. Repentance is hard work. It is a discipline; basic training of the spirit that deconstructs our egos, tears us down and builds us up again. It forces us to take responsibility for our actions. It makes us confront our sins and decide between them and God. It makes it impossible for us to serve two masters; to turn and follow Christ is to leave our old lives behind. It is no coincidence that baptism is all at the same time the symbol for the death of the old life, the washing away of our sins, and the beginning of the new life. All of those moments converge at the point of repentance.

Produce fruit in keeping with repentance. Rocks might work, too.

"Sorry Rocks" by Patrick D. Odum is licensed under a Creative Commons License. Heartlight encourages you to share this material with others in church bulletins, personal emails, and other non-commercial uses. Please see our Usage Guidelines for more information.