Say a Prayer for Me

What can we do to help others in the middle of their messes? 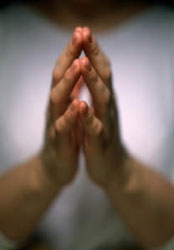 by Kelly Breece (04/14/2004) | Just for Women
"Are you all from America?" asked the passerby. I sheepishly looked around for support from the other ten or so people behind me in line. This native, walking past the customs line in the airport, shook his head in annoyance. Obviously this familiar sight wasn't a welcome one to him.

"Next!" the customs agent barked. Nervously I fumbled around gathering my bags and my heavy winter coat, never taking my eye off of my passport and work visa information, so as not to drop them. There was no room for error. Stay focused, I reminded myself.

"What is the purpose of your visit?" she asked. In a soft but firm voice I answered all of her questions, breathing slightly easier with each one that I was able to sufficiently answer. The stoic, expressionless woman then gathered up all of my paperwork, and without a word, stood and walked away. It appeared that I had passed the test and was going to be allowed to enter the country. While waiting for the final word, I couldn't help but overhear the man standing next to me, separated only by a frosted glass partition.

"Sir, you don't have the proper paperwork. I cannot allow you to enter the country without it," his agent declared.

The man's voice began to tremble as he desperately tried to plead his case. Nothing he said seemed to faze her. The man seemed not at all arrogant. He simply was traveling to this country to do some work as a computer programmer and was now faced with the possibility that he wouldn't be allowed in. Explaining to the agent that he would most likely lose his job if he were not able to complete his assignment seemed useless.

I started to pray for him. I asked God to guide him through this situation and to somehow help him get past the obstacle he was facing. After having prayed all morning that my own trip would be safe and without problems, I became vividly aware that this man, whom I had never seen before, and would most likely never see again, needed a sincere prayer to be offered on his behalf.

As I was talking to God, I noticed a change in the voice of the agent. She seemed to be softening her tone a bit. Within a few minutes, she firmly explained that she would not allow the man in next time without proper documentation, but that this time she would. A sigh of relief washed over the man as he thanked her for helping him. And I thanked God for helping him.

That morning reminded me of a special memory from years earlier. It was a time of great uncertainty with my career. Many people around me had lost their job, and I was faced with the likelihood that I would be next. One night while at work, I began chatting with a person whom I merely considered to be an acquaintance. We worked in completely different departments and rarely saw one another. As we talked about the situation at work, I nonchalantly said, "Well, say a prayer for me, I'll probably be next." I didn't expect to get a response, at least nothing more than a simple, "Sure I'll do that." Instead, he looked up at me and softly said, "I already did."

I realized at that moment that even though my own faith had become weak, God was hearing prayers offered for me. I wasn't alone.

I did lose my job, and now, nearly six years later, after having started my own business, I still thank God everyday that I did.

"The only thing that counts is faith expressing itself through love." (Galatians 5:6)

"Say a Prayer for Me" by Kelly Breece is licensed under a Creative Commons License. Heartlight encourages you to share this material with others in church bulletins, personal emails, and other non-commercial uses. Please see our Usage Guidelines for more information.