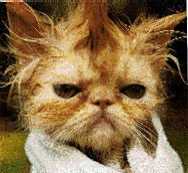 by Bill Sherrill (02/21/2004) | Special Features
You will find a lot of discussion in the Bible about sheep and goats, but there just doesn't seem to be a good passage on sheep and cats. For that, and other good reasons we will just have to do without an opening text for this discussion.

The Word of God was wise when it chose sheep as a type of lost man. Sheep are such simple animals. When you find a lost sheep it looks lost. It knows it's lost. You know it's lost. There is just a simple openness and helplessness about lost sheep. So when God says in  Isaiah 53, "All we like sheep have gone astray ..." it isn't really hard to relate the picture to lost man.

On the other hand, if He had said, "All we like cats have gone astray ..." we would have a totally different problem. Cats just don't like to think of themselves as strays. They never seem to be able to admit that they have made a mistake. There is a certain air of pride about a cat that sheep just don't have. The cat may know that he is lost but he is not going to let you know that he is. Cats seem to always be saying, "I know who I am and what I am doing, and it is just exactly what I intended." He can fall in the pond, nearly drown, and barely make the bank alive, but he will crawl out, look you square in the eyes and say, "I meant to do that."

Sometimes I wonder if we aren’t more like cats than sheep.
Sometimes I wonder if we aren't more like cats than sheep. We seen to do such dumb things and then our pride makes us say, "I meant to do that." I pray that we will not really turn out to be that way. I hope that we will realize that we are in fact sheep that have gone astray. After all, the Savior is a finder of lost sheep, not an admirer of proud cats!

Once you were wandering like lost sheep. But now you have turned to your Shepherd, the Guardian of your souls. (1 Peter 2:25)

"Sheep and Cats" by Bill Sherrill is licensed under a Creative Commons License. Heartlight encourages you to share this material with others in church bulletins, personal emails, and other non-commercial uses. Please see our Usage Guidelines for more information.