True Love from Hope and Faith

Can hope really survive in such a tough time? 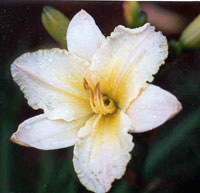 by Janice Price (02/14/2004) | Special Features
Editor's Note: This is not your typical Valentine's day love story. On the contrary, this is a real life story of how the loving heart of one dying little girl touched the hearts of a whole community and helped them share love with those who need it most.

We also glory in tribulations, knowing that tribulation produces perseverance; and perseverance, character; and character, hope. Now hope does not disappoint, because the love of God has been poured out in our hearts by the Holy Spirit who was given to us. (Romans 5:3-5)

Hope Stout died recently from osteosarcoma, a type of bone cancer. Amazingly, she leaves behind a million-dollar legacy for other seriously ill young patients. It's amazing because Hope was only twelve years old.

When the Make-A-Wish Foundation of Central & Western North Carolina offered Hope an opportunity to have a dream come true, she asked how many other local children were waiting for a wish. She was told there were one hundred fifty-five on the list. Hope expressed the desire to see every one of those wishes come true.

Make-A-Wish determined it would cost $1,000,000 to fulfill all 155 wishes and Hope's hometown began fundraising. On January 16th, this goal was surpassed at a "Celebration of Hope" fundraiser.

In December a radio interviewer was moved to tears as Hope described how her family supported her during her hospital stay while some of the other young patients didn't have family with them. She talked openly about how her family's faith in God was helping them through their ordeal.

One young girl's lovingly super-sized dream sparked a campaign to ensure that all 155 wishes become a reality. Hope's dream did not die with her. It is comforting her family and touching more lives nationwide than she ever imagined. She believed that anything is possible with God and that her illness could become an encouragement and a blessing to others.

Hope's dream did not die with her.
Children have an endearing, unsophisticated faith that God can often use to direct adults back to the simplicity of faith in action. In this instance, he used a girl named Hope.

Now may the God of hope fill you with all joy and peace in believing, so that you will abound in hope by the power of the Holy Spirit. (Romans 15:13)

"True Love from Hope and Faith" by Janice Price is licensed under a Creative Commons License. Heartlight encourages you to share this material with others in church bulletins, personal emails, and other non-commercial uses. Please see our Usage Guidelines for more information.