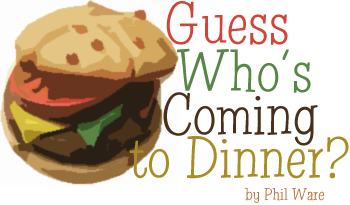 The two friends trudged home the torturous seven miles. They had made this journey many times before, but this time each step was heavier and each landmark was blurred by tears. Their devastating disappointment clung to them like wet clothing and their hunger was masked by the ache in their heart.

Along the way, a stranger joined them on their journey. He didn’t seem to know of the great tragedy, but his presence soothed the ache in their hearts and made their journey more bearable. When they reached their home, they asked him in to share a simple meal. As they sat to eat, the stranger took the position of the host. He gave thanks for the bread, broke it in pieces, then gave some to the two friends. Suddenly, as if blindfolds had been removed from their eyes, they recognized him. It was Jesus! The resurrected Jesus was made known to them in the breaking of the bread.

For Christians, there is no such thing as a “normal” meal. When believers come to the kitchen table to share a common meal, something uncommon happens. As they bless their food and share each other’s company, as they tell of their day and laugh at each other’s jokes, as they share in normal conversation a special guest joins them. The Lord is present in the breaking of the bread.

A recent study said the average American spends six years of his or her life eating. But this six year block of time is not a waste—these pauses in the day slow us down, let us sit with friends, allow us to take in nourishment, permit us to enjoy the refreshing presence of special people, and give us the opportunity to re-connect with family and affirm our love for each other. In our stress crazy world, sharing a meal is a time to unwind and relax.

But for believers, even the most simple meal is a time of special significance. At our table is the unseen guest, the eternal friend. So when you sit down tonight to eat, pause for a minute and ask yourself the question, “Guess who’s coming to dinner?” If you listen to the conversation and look closely, you’ll find he makes himself known to you in the breaking of the bread.

“When you are gathered in the name of the Lord Jesus, …the power of our Lord Jesus is present.”
—I Corinthians 5:4

HEARTLIGHT(sm) Magazine is a ministry of loving Christians and the Westover Hills church of Christ.
Edited by Phil Ware and Paul Lee.
Copyright © 1997, Heartlight, Inc., 8332 Mesa Drive, Austin, TX 78759.
May be reprinted and reused for non-commercial purposes only if copyright credits are appropriately displayed.
HEARTLIGHT and the flared heart design are service marks of Heartlight, Inc.