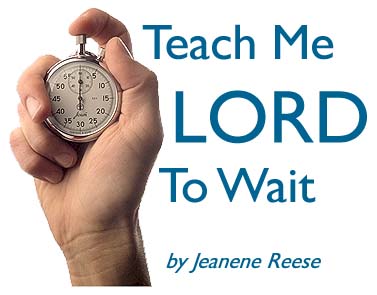 Waiting. We were all stuck in the airport, unable to make a move to get where we wanted to go. A sudden, heavy thunderstorm had completely stopped air traffic in and out of Dallas-Ft. Worth Airport.

Desperation was etched on several faces as they tried to explain to the ticket agents, why they simply had to get another flight, how trips had been planned for a long time, how other people were waiting somewhere to meet them or that a big event was about to be missed.

The airline employees patiently pounded on their computers looking for impossible solutions to these many and varied concerns. Passenger after passenger was asked to take a seat in the lounge area. We would all simply have to wait.

It was interesting to watch how we reacted to the reality of waiting. I spent one whole day with people I will most likely never meet again and each of us learned things about ourselves and each other that day.

The range of emotions among the travelers was as varied as their skin, hair, and eye colors. Some seemed to take it in stride. These were usually the veteran flyers—those who often faced this sort of ordeal. They typically used their waiting time to their own benefit: catching up on work, writing letters, doing homework, visiting with others, or reading a book.

Others seemed to think that waiting for the weather to change was a personal affront to them. That maybe the airlines had been inefficient in not ordering better weather or that they could at least have offered a better solution than just having us sit there.

These people spent their waiting time fidgeting, anxious to move on to another activity, frequently complaining loudly to anyone who would listen (and even to those who would rather not). One woman described our day of waiting as the worst day of her life. Her comment surprised me, I couldn’t help but wonder what ordinary life was like for her.

It made me realize, however, that to some extent the measure of our ability to wait is a reflection of our inner person. The question is not really whether we will wait. We often don’t have a choice. The question is how will we wait? For the person of faith, this question has serious spiritual consequences. 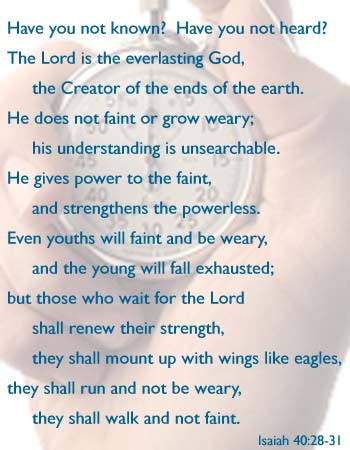 These well known words were written originally to the children of Israel as they were returning for their exile in Babylon. Their city was gone, their temple destroyed. They had been in bondage under harsh rulers for over sixty years. They had waited to see what God would do in their seemingly impossible situation, they had had no choice but to wait.

Even in their waiting, the people had not become immersed in the Babylonian civilization. Unlike many nations. they had kept their identity and remembered their God. Now in their release they were to return to their homeland to reestablish their lives, their country, and their faith.

But the people were tired, weary, full of doubt. They felt forgotten and had begun to ask the questions: Who is God? and therefore, Who are we? The words of the prophet now resonate in their ears.

Their God is everlasting, he is the creator. God does not faint or grow weary, he has unending strength. God’s ways are unsearchable. He gives power to those who are faint and strength to the powerless.

As to who God is, the answer is direct and sure. But who are his people in this context? They are the weary, the fainthearted, the exhausted—they are those who must wait for him. They have no strength to continue on their journey. It is not circumstances that has stopped them, but their own inability to go on.

The truth is that all people of faith are at some time the people for whom these words are written. We all must wait for the strength of God. His assurance to these patient waiters in him is that their strength will be renewed. They will soar with wings like eagles.

We often sing these verses in the refrain of a popular worship song,  “They shall run and not be weary, they shall walk and not faint. Teach me, Lord. Teach me, Lord, to wait.” May it be so in the times of our life when we must wait. Beyond our inconveniences, in times of fear and defeat, may we have the courage to place our faith in him.