The Search for Jesus' Love

Where can folks find Jesus' love in your town?

ToGather: Where Do I STAND?

Join us for this week's ToGather.church online worship and a message from Phil Ware. 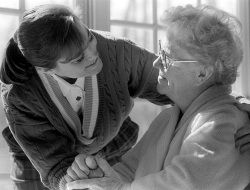 "I will appoint responsible shepherds to care for them, and they will never be afraid again. Not a single one of them will be lost or missing," says the LORD. (Jeremiah 23:4)

In his story "Where Love is, There is God Also," Russian author Leo Tolstoy tells us of a shoemaker who was looking for Christ and found him in the poor people who came to his door. "After about two months I accepted Christ as my Savior and was baptized," he said.

The well-known Quaker writer Robert Barclay wrote about the drawing power of an assembly of Christians with these words, "I felt a secret power among them which touched my heart; and as I gave way to it, I found the evil weakening in me and the good raised up."

Both of these men were seeking to find something that they knew was missing in their lives. They longed to know God in a more personal way. Often people are searching for a larger meaning for their life than they currently experience. They see a picture God has painted to give them a glimpse of Him.

Tolstoy was very wealthy, and had many servants — but he felt empty inside. He noticed something about the poor people who worked for him. They had an inner peace, a joy that rose above their circumstances, and a concrete hope that God would fulfill them in ways greater than they could imagine.

Tolstoy did a painful spiritual inventory. His conclusion was that his poor servants possessed things that were worth more than the whole world. He grappled with what he should do. Then Tolstoy turned his back on his wealth, giving it to the poor.

Though this caused his wife and children to become bitter toward him, he found an inner peace in living a simpler life centered on the study of Jesus' life, and in seeking to serve his fellow man.

Sarah Phillips was 27 and dying with ALS, a degenerative nerve disease. She knew what was happening to her body, and she did not want to spend her last weeks in an institution. She wanted to be able to go home to her apartment for a couple of weeks, then go to her mother's house for her final days. Arrangements were made for a nurse to be with her during the daytime, but Sarah was terrified of sleeping. Less than a year earlier, her father had died of ALS in his sleep.

Sarah was not a Christian, but she knew about a church that was sensitive to people with life-threatening illnesses — Reba Place Church in Evanston, Illinois. One of their members, Jerry Bogatz, had only one goal in his life: to show people the love of Christ. The Bogatz family brought Sarah to church. The church put their arms around her.

They believe the weak and the needy would receive Jesus' care for as long as they were in need.
Martha Cooper, a paraplegic, reached out with to her with special understanding. When Sarah wanted someone with her at night, the sign-up list was full. She asked the church to care for her and not abandon her to a nursing facility. Sixteen women, in teams of two, adjusted their schedules to show Christ's love to Sarah.

As her health continued to fail, they did everything they could. They calmed her panic when she would wake up in the night. They remained dependable in caring for Sarah and in sharing the "Good News" with her. How she responded to that News was between her and the Lord.

The Reba Place excels in the difficult arena of serving those who can do nothing to repay the service. Why? Because they believe the weak and the needy would receive Jesus' care for as long as they were in need.

When the world is looking to the church, what will they see? People who care when it's convenient, or people whose care goes far beyond convenience? Sarah said that she experienced "God's love and Jesus' compassion."

"The Search for Jesus' Love" by Randy Becton is licensed under a Creative Commons License. Heartlight encourages you to share this material with others in church bulletins, personal emails, and other non-commercial uses. Please see our Usage Guidelines for more information.

ToGather: Where Do I STAND? (January 17, 2021)
People “stand for” or “stand on” many things that waste their time, efforts, and lives on causes that don't really matter.

Escaping the Dark, Lonely, Hole of Depression
Find someone you can talk to. Don't wait any longer. Get the conversation started!