Is there something out there? What would it mean if there were? 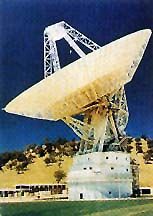 For the truth about God is known to them instinctively. God has put this knowledge in their hearts. From the time the world was created, people have seen the earth and sky and all that God made. They can clearly see his invisible qualities — his eternal power and divine nature. So they have no excuse whatsoever for not knowing God. (Romans 1:19-20)

You may have been sleeping (as I was) when the news story broke about the recent discovery of abundant water on Mars. This water was in the form of permafrost, and the news excited some scientists about the possibility of finding traces of life there.

One of those scientists was Paul Davies, who teaches at the Australian Center for Astrobiology at Macquarie University in Sydney. He is well-known for his book Are We Alone? , for which he was given the prestigious Templeton Prize For Progress in Religion. Davies now devotes himself to "the race to find life elsewhere in the solar system" and believes "whether or not we are alone is one of the great existential questions that confronts us today." 1

What if NASA launched a craft that located and retrieved living organisms on Mars? Would it so shock scientists, philosophers, and theologians that they would ask if any earthly religion could survive the discovery?

Albert Einstein believed that man had some inherent "cosmic religious feeling" when contemplating the awesome majesty of the universe. Yet many scientists have refused to discuss religion, for various reasons — one being that religious claims cannot be scientifically measured.

Steven Dick works as a science historian at the U.S. Naval Observatory. He believes that if any advanced alien beings were ever found, they might be advanced beyond the scope of the world's established religions. He believes that they would have so much to teach us that any concepts of God we have would be totally transformed. And he proposes exchanging the idea of a "supernatural, monotheistic God" for that of a "natural God of cosmic evolution and the biological universe".

I know that debates about extra-terrestrials come and go. They rise in intensity and fall back into malaise. But there are aspects of this newer astrobiological argument against Jesus Christ's identity that are heresy wrapped up in a beautiful package. It's all being presented to our children as truth, when it is truly all lies.

Here are Dr. Davies' words: "What about mankind's presumed special relationship with God? This is a conundrum for Christians. Jesus was humanity's savior and redeemer. He did not die for the dolphins, or the gorillas, and certainly not for the proverbially little green men." So, Dr. Davies suggests, Jesus is limited in who He can save. And people on earth may not have an exclusive relationship like the Bible describes.

Yes, many scientists are awakening their interest in a "designer" behind the universe. But they don't refer to God as the designer; they prefer a "natural" God — a "superbeing" located within the universe and within nature. Fred Hoyle, in The Intelligent Universe , suggests some form of natural God: a cosmic engineer.

Scientists sometimes describe their quest to find the origin or source of life exclusively in scientific terms. When I read their words, I want to offer them an altar to put their knees on and teach them the Lord's prayer. Origin=God, Source=God.

From Acts 17 come these words about us and God: "... He Himself gives all men life and breath and everything else ... He made every nation of men ... in Him we live and move and have our being ..."

Origin=God, Source=God.
In John 1, these words are recorded about Jesus: "He was with God in the beginning. Through Him all things were made; without Him nothing was made that has been made. In Him was life ... He came to His own, but His own did not receive Him .... to all who received Him, He gave the right to become children of God .... the Word became flesh and made His dwelling among us. We have seen His glory, the glory of the One and Only, who came from the Father, full of grace and truth."

Jesus came to die for your sins and mine. He came from the glory of heaven to earth to experience life just like us, so that we could go to heaven to live with Him and His Father. Jesus provided the way. He said, "I am the Way, the Truth, and the Life. No one comes to the Father except through Me." (John 14:6) He said to His followers, "Do not let your hearts be troubled, trust in God, trust also in Me." (John 14:1)

The most learned persons in science should realize that they are discovering only a small part of the beauty and intrigue that exists in the Father's fascinating universe. They should pause at times to lead us in hymns and prayers of gratitude. When we've deepened our sense of wonder, we should give credit to the great designer — God. Why do they not? For some, perhaps it is pride. What limits you?

Who is Jesus? He's the principle player in the drama of God's salvation story — the willing Savior. The Bible teaches "life from nothing began through Him, and life from the dead began through Him, and He is, therefore, justly called Lord of all. It was in Jesus that the full nature of God chose to live, and through Him, God planned to reconcile ... by virtue of the cross." (Colossians 1:15-17)

Whatever they find that we call E.T., that whatever will face the eternal Father. Speculation, I've found, is largely a waste of time. Christ is Lord of all.

"E.T. and Christ" by Randy Becton is licensed under a Creative Commons License. Heartlight encourages you to share this material with others in church bulletins, personal emails, and other non-commercial uses. Please see our Usage Guidelines for more information.

ToGather: Confident and Courageous! (April 11, 2021)
Jesus rose from the dead, so we choose to live based on the conviction that this world is not our home, while we long for our lasting and more glorious one!

Twenty-five: A Quarter Century of Grace
The Lord is not finished surprising us with His grace and power if we live for His purposes.