With Jesus You Can Stay On Your Feet

Do disappointments and discouragement keep knocking you down? 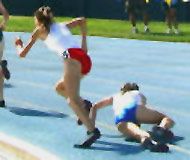 by Jim Clark (10/08/2003) | The Caring Touch
At times, life can throw so many obstacles our way that we're tempted to throw in the towel. Is that how you feel today? When you hear Beth Anne's story, you'll be inspired to never give up.

Runner Beth Anne DeCianti ran in a marathon in order to qualify for the '92 Olympic Trials. To make the cut, she had to complete the 26-mile, 385-yard run in less than two hours and forty-five minutes.

But at mile 23, Beth Anne started having trouble. As she reached the final straightaway, she had just two minutes left to qualify. Then she stumbled, and fell! The crowd yelled, "Get up! Get up!"

Less than a minute remained. Beth Anne staggered back to her feet and started walking — and fell once more. Then she began to crawl. The crowd cheered her on as she crossed the finish line on her hands and knees. With three seconds to spare, Beth Anne DeCianti qualified for the Olympic Trials — all because she refused to give up.

Has your life lately been like Beth Anne's grueling run?

Do disappointments and discouragement keep knocking you down?

I want to encourage you in the Lord to never, ever give up. Let these words from Hebrews 12 keep you on your feet:

Keep your eyes on Jesus, who both began and finished this race we're in. Study how he did it. Because he never lost sight of where he was headed . . . When you find yourselves flagging in your faith, go over that story again . . . That will shoot adrenaline into your souls! (Hebrews 12:2-3 The Message)

"With Jesus You Can Stay On Your Feet" by Jim Clark is licensed under a Creative Commons License. Heartlight encourages you to share this material with others in church bulletins, personal emails, and other non-commercial uses. Please see our Usage Guidelines for more information.

Jim Clark is Executive Director of the Christian Service Center in Abilene, Texas.

ToGather: Made To Be More! (April 18, 2021)
We will exchange our mortal bodies for immortal bodies that are made for eternal glory!