© From her book, "A Woman's Touch: The Fingerprints Left Behind" © 2001, Howard Publishing Company. Used by permission. This article cannot be reprinted in another publication without written permission of the publisher. Click here to buy this title online! 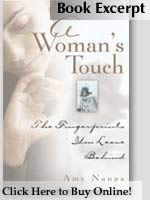 Heartlight only exists because of your support! Click above to visit a sponsor, or donate to join us in our ministry.